When making decisions about cryptocurrency investment, one key metric that is often used is a coin’s maximum supply. This number refers to the total number of coins that will ever be in circulation and varies from crypto to crypto. While some cryptos opt to have an extremely low supply, such as Maker, which only has about 1M coins in existence, others have billions or hundreds of billions, like Doge. As experienced crypto investors are aware, the max supply has a great impact on the potential value per coin. VAULT has taken the approach of Bitcoin, choosing a relatively low maximum supply of 21,000,000 coins that will be dispersed over an extremely long period of time.

However, Masternode coins tend to inflate their coin supplies far too quickly, leading investors to believe that a low supply virtually guarantees good economic conditions. Many may look at Vault’s 21M cap and think that it is actually high and that the market will be flooded with coins.

They would be badly mistaken

Let’s take a look at where VAULT stands today, approximately one year since the launch of its blockchain. Currently, there are:

203,000 are locked in Masternodes, representing about 90% of the current supply.

This means that only about 1% of coins are available on markets, and a good portion of these are likely being held in staking wallets.

For a project in its second year of operation, these numbers are in a league of their own. Only 1% of the total VAULT coins have been minted thus far.

But in the years to come, VAULT will still remain scarce as the VAULT blockchain has made its final change to block rewards. So consider the following:

Max supply is only a good metric when paired with the rate at which it will be met. In the case of VAULT, its relatively low supply, and extremely slow emission rate guarantees that scarcity will be maintained. Add in the effects of CRYO that prevent mass coins and masternode dumping, and the results are limitless. VAULT is able to sustain a high value per coin and plans on continued added value through utility and platform improvements.

In Vault’s ~1 year of existence, a number of utilities and platform improvements have been achieved. Since VAULT has no established roadmap, its talented team of in-house developers is free to innovate at an accelerated pace. VAULT has all of the resources to develop any utility that it and its community desires.

In the past year, Vault has achieved:

As the next step in the latest push to increase demand and attract new partnerships and listings to the VAULT platform, VAULT is offering investment packs available for OTC purchase. See the pack sizes and prices below: 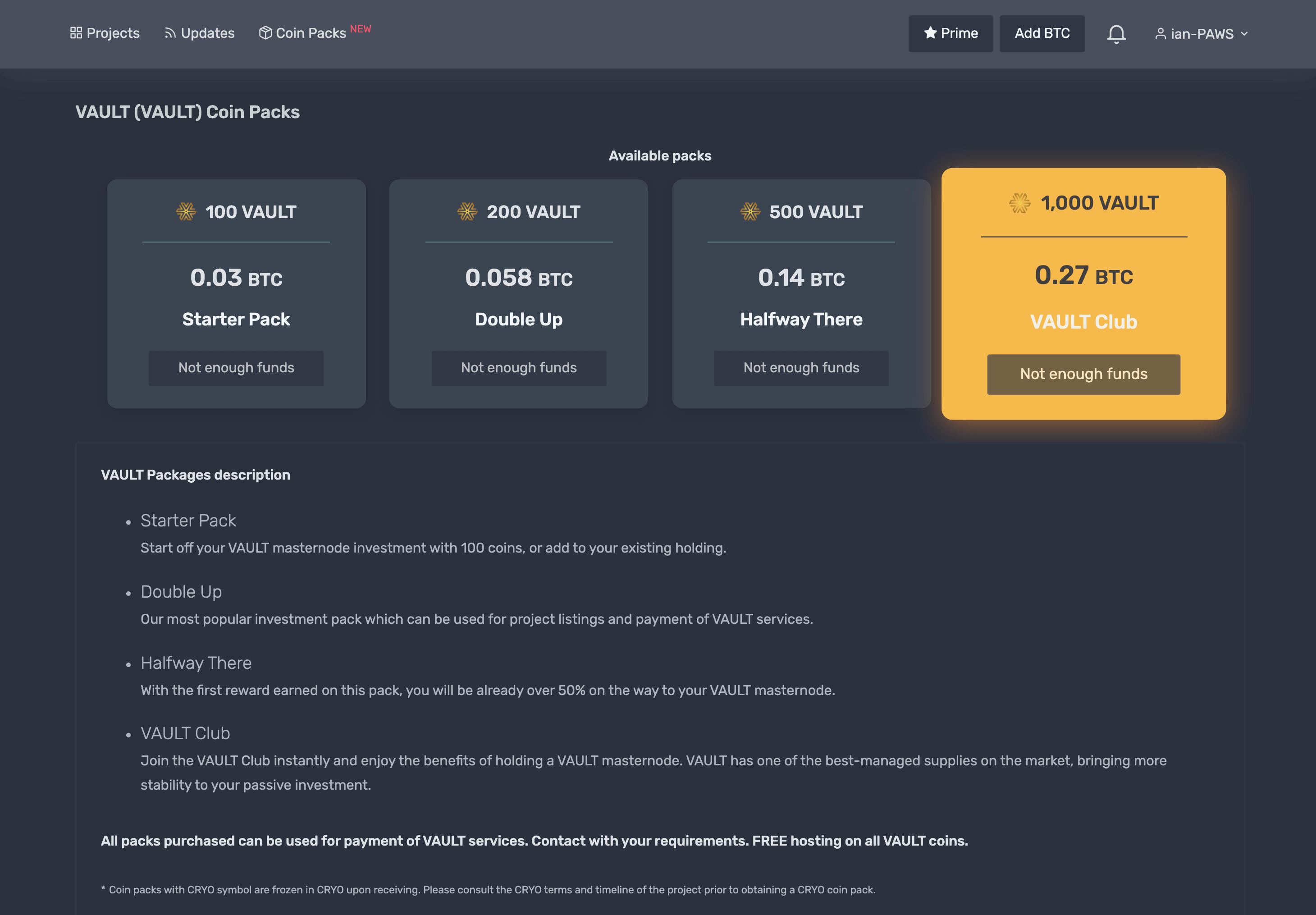 As the graphic indicates, VAULT packs of 100, 200, 500, and 1000 coins are available for purchase, with increased discounts for larger purchases. Investors who reach the 1000 coin mark are invited to join the VAULT club!

Packs will also be available for HCA, PAWS, TPC, and all participating listed projects.

For more information on VAULT, visit The Vault.Investments website and join the Discord channel for regular updates!